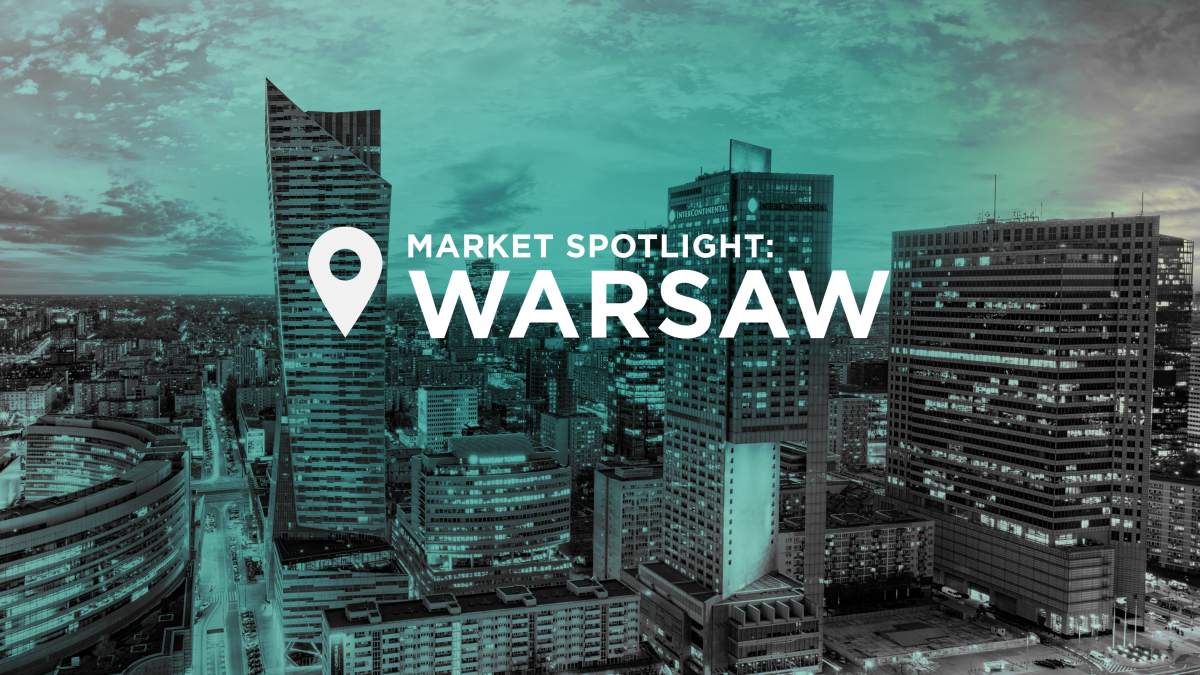 The Growing Influence of Poland in the European Data Center Market

In our last Market Spotlight article, we took a detailed look at the growing data center industry in Frankfurt, Germany. The area around Frankfurt is gaining significant attention from data center providers and end users for a number of reasons – among them the stringent data privacy policies and regulations in Germany, the city’s growth as a major financial hub, the presence of an Internet Exchange Point and the presence of affordable land.

Some of these factors driving data center development in Frankfurt are also driving growth in another data center hotspot that’s just a short hour and a half plane ride away – Warsaw, Poland.

This may come as a surprise for some since Poland – as a nation – is not often mentioned when talking about the European Union’s (EU) largest economies. But Poland is having a moment, and the data center industry is taking notice.

Let’s take a look at why Poland – and Warsaw in particular – is such a hot data center market today and positioned for meaningful growth in the future.

Data privacy and cultural concerns drive data centers to think locally
While Poland may not be as stringent in data protections and privacy regulations as Germany, it does take its lead from the EU. Whereas Germany requires most German citizen’s data to be stored in country, many EU countries currently follow the General Data Protection Regulation (GDPR), which requires EU citizen data to be stored in the European Economic Area (EEA).

Much like Frankfurt, this is impacting the growth of the data center industry and data center development in other EU markets. And that includes Warsaw, Poland, which sits strategically as the gateway between Western and Eastern Europe.

When countries begin to regulate where their citizens’ data can be transferred, stored and accessed, it creates a need for companies to have IT infrastructure in a range of different regions, countries or what is sometimes referred to as cloud regions. Often, companies will look to cloud providers for their infrastructure, and those hyperscale cloud companies will – in turn – look to data center providers to ensure that they have facilities in the countries and regions where their customers need them.

Today, there is no established cloud region in Poland; however, based on recent announcements from Google and Microsoft, that will be changing soon. Most data center users are relying heavily on markets such as Frankfurt to meet their digital infrastructure requirements. Launching a cloud region in Poland creates a beachhead for pent-up-demand from companies desiring a local presence. It answers the mail for data privacy, reduced latency and proximity to a local customer base.

But the desire to keep data in one region or country isn’t always driven by data privacy and data protection regulations. Sometimes, it’s just driven by culture. Companies want to work with vendors that speak their language – and we mean that both literally and figuratively. Approximately 97 percent of the people in Poland speak Polish as their primary language. Working with companies and vendors that share the common language and culture can make the partnership stronger and easier for all parties involved.

But language and culture aren’t the only considerations. There needs to be a demand signal that drives data center providers and end users to develop a data center in a city or region. And that demand signal almost always follows economic growth.

A growing digital economy with an educated workforce
Bolstered by economic and political reforms and infrastructure investments, the Polish economy is accelerating and rapidly catching up with the largest economies in the EU. As Eglé Fredriksson, a Portfolio Advisor at East Capital wrote in an article in EuroNews:

During the current global economic slow-down, Poland stands out as a European growth champion. With an uninterrupted pace of high growth averaging 4.2% per annum between 1992-2019, Poland is steadily catching up with Western Europe and has become the seventh largest economy in the EU with a total GDP of €524 billion.

One of the emerging growth industries in Poland is technology. The country also features a growing digital entertainment and video game industry. In fact, according to rankings by Deloitte Technology, 20 percent of the fastest-growing technology companies in Central Europe are in Poland.

Much of this growth in the IT sector has been driven by the country’s large population of an incredibly educated workforce. According to a report by McKinsey & Company, the Polish workforce, “has a talent pool of highly educated workers, as measured by the number and quality of graduates from institutions of higher learning. About 22 percent of Poland’s population aged 24 or above has a university education.”

Yet, none of this would ultimately matter if Warsaw didn’t “check the boxes” for basic data center requirements.

Stability and available land
While there are many different factors that determine which markets data center providers look to build and grow in, none are as important as the big three – available land, power at competitive rates and rich connectivity. And Poland scores on all three accounts.

While it may not get the recognition that other European data center markets receive – including Frankfurt, London, Amsterdam and Paris, Poland is poised for an explosion of data center development in the near future. Located strategically at the gateway between Western and Eastern Europe and featuring a growing economy and technology sector in need of cloud and other hyperscale services, Poland is a market that is sure to attract global enterprises as their businesses scale throughout Europe.

From soccer goals to business goals – lessons from the pitch applied to the data center.